I had mentioned in my previous post that I recently upgraded to the iPhone 4s. I know right? Took me long enough. Honestly? I sat on my old phone for a while because I was terrified of the back up malfunctioning somehow resulting in me losing out on everything. I have so many things in my notes/calendars and so forth, important dates and things I could not replace that I was so scared it was all going to be lost. Now I know that seems totally irrational….but seriously, my luck with technology is not good. I now have 2 back ups of my backups (all my pics)….it is that serious.

Not to mention I rarely like spending ungawdly amounts of time standing in line at Best Buy, so I basically avoid it like the plague. But the new phone has been calling me. Especially since my 3G phone has been threatening to brick on me any moment and I have often had to revive it when it would go into the endless recovery loop mode or the random shut off with the charging symbol mode no matter how long it has been plugged in to charge crap mode…. I luckily though through countless hours searching forums and youtube videos, found two awesome fixes for my usual iPhone situations. Untech savvy girl problems! So really, an upgraded was needed. I had the other for 2 years! That is like an eternity in tech years.

So the other day I brought home my 4s, and lovely Siri and I have been in love since. I also realized she is going to make a great pocket companion. She is like my new virtual best friend who does what I say when I say it and rarely back talks. I like her. 🙂

And yes…..she calls me Ninja Spice…….I am cool like that.

Even by her pleading the fifth, by her not capitalizing “canon” made me know she is also a Nikon fan. She just didn’t want to ruffle any feathers….such a peace keeper.

Yes, Siri and I will be the best of friends….

I finally got with the times and traded in my pokey iPhone 3G in for the new iPhone 4s and I tell you what, I LOVE the new camera on there. Sure Siri is a hoot when intoxicated (me, not her) and the speed makes me feel like I am not on a computer that uses dial-up, but the camera on here is SO much better than on my old phone. So is the video. I also have a mild obsession with camera apps, one being Instagram which I have a feeling I will be using more often now. So with that…..

Meet Sass. Much like her online name might suggest, she is very sassy; though you may be shocked to know what Sass really stands for, because it isn’t “sassy.”

She is 4 going on 13, attitude and all but she cracks me up daily. Sometimes I have to reel myself in and remember she is only 4. She has been so advanced for her age, she is the size of a 6 year old and has the vocabulary of a child around 8. She also enunciates very well.

I always say she is going to be my star. She loves to sing and dance and be the center of attention, this is my child indeed. She is loud, opinionated and very lovable with a soft heart. She is very caring and sweet and does what she wants when she wants. Like I said, a definite product of me.Except her dimple in her chin, that is a trait she got from the milk man.

Becoming a mother 4 years ago has given me a life experience that has been so enlightening and frighting at the same time. Because holy crap….I am responsible for them and how they turn out. Clearly God has a sense of humor because he gave me two just like me. My Mother always said this would happen, of course I didn’t listen. 🙂

And then we have Sprout. There is also much to say about this little dimple cheeked rounded headed munchkin. She is almost 100% opposite of Sass, as she is my quiet observer.

Not to say she isn’t loud, because OOOOh she has pipes on her as well (we are all loud, what can I say?) but she is much more reserved. I can see her sitting back and thinking, she is much more chill and relaxed and talks when needed. She is so full of laughter and joy, though no one but me sees this. One thing about Sprout is she is VERY shy around strangers, something I was when I was younger. Sass is not shy around anyone and talks up a storm, much like me now. Sprout also has these deep cheek dimples that are to die for. Another trait from the milk man, as she nor her father have them. She will be 2 in June, and knock on wood, I don’t think we will really be hitting the “terrible twos.” She is very calm and just there. I love her to pieces, I have two polar opposite kids, but both just like me. Gotta love it. 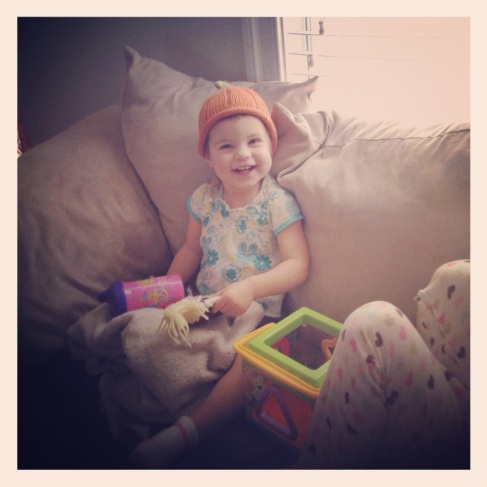 I post the one below of Sass because this is so her personality. She wanted me to take a pic of her “sleeping” though she was over there giggling the whole time.